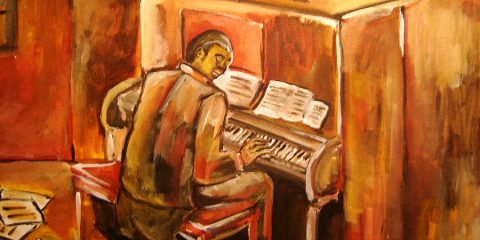 Come on an exciting “RAGTIME ROMP” in this thrilling afternoon program at a private home in the Givens Estates.   Pianist Daniel Weiser will perform about 20 different rags from composers including Scott Joplin, Tom Turpin, James Scott, Joseph Lamb, George Gershwin, and more.  He will also perform some fun novelty rags including “Ragging the Scale,” “Russian Rag,” and Felix Arndt’s hilarious “Operatic Desecration Rag.”  Dr. Weiser will talk about the history of this exciting syncopated music as well as the profound social implications of its rise from black ghettos into white cities.  Take a trip back to the first twenty years of the 20th century when Ragtime was king!

Join us at the home of Dick and Ann Bury for this afternoon program of fun live Ragtime music along with Dr. Weiser’s always informative anecdotes about the history and sociological context of this truly great American music that was the first recording and sheet music craze of the first decades of the 20th century, but also caused many writers to fear that the end of society had come with this “decadent, primitive” music!   Seating will be limited and by reservation only.  Special discount price for Givens residents.  Click on the arrow below for non-Givens prices and to buy more than one seat.

Purchase a seat for just the February 27 class below

Purchase a seat for just the March 6 class below