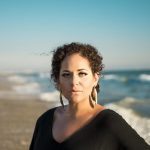 Mezzo-soprano Jenni Bank was born in Johannesburg, South Africa and grew up in Binghamton, New York. Ms.
Bank performed the role of The Duchess in The American Premier of Unsuk Chin and David Henry Hwang’s Alice
in Wonderland with Opera Theatre of Saint Louis for which Opera News called her performance “a standout”,
proclaiming she possessed a “luscious, dramatic voice and plenty of stage humor” and made her European Debut
singing Chin’s Scenes From Alice in Wonderland with the Royal Stockholm Philharmonic. She performed this work
again with the Bergen Filharmoniske Orkester in Bergen and Oslo, Norway and reprised the role of The Duchess in
2015 with the Los Angeles Philharmonic at Disney Hall and at the Barbican Centre in London with the BBC
Symphony Orchestra. Ms. Bank will soon be reprising the piece in Seoul, South Korea with The Seoul Philharmonic.
Ms. Bank was thrilled to return to Opera Theatre of Saint Louis in 2016 to sing the role of Firdhaus Noman in the
World Premier adaptation of Salmon Rushdie’s novel Shalimar the Clown, composed by Jack Perla with a libretto by
Rajiv Joseph.

As a standout in both seria and buffa roles, Ms. Bank’s voice has been praised as “lush” by The Wall Street Journal
and The Baltimore Sun has described her voice as a “deep, dark, penetrating tone…that can extract Verdian
richness.” Following her studies in voice and opera at The Peabody Conservatory of Music at Johns Hopkins
University, Ms. Bank participated in prestigious Young Artist programs at Seattle Opera, Opera Theatre of Saint
Louis, Des Moines Metro Opera, and Opera New Jersey.

In the summer of 2015 Ms. Bank was a member of the world-renowned Filene Young Artist Program at Wolf Trap Opera where she performed the roles of Marcellina in Mozart’s Le Nozze di Figaro and Samira in Corigliano’s The Ghosts of Versailles at The Barns at Wolf Trap. Ms. Bank returned to Seattle Opera for their 2017 season to make her MainStage debut performing Third Lady in Mozart’s The Magic Flute.

This season also included her debut with Knoxville Opera as Ruth in Gilbert and
Sullivan’s Pirates of Penzance, a return to the Young Victorian Theatre Company of Baltimore as Little Buttercup in
H.M.S. Pinafore, and a Third Lady (cover) with The Chicago Lyric Opera. Next season Ms. Bank will debut with
Hawaii Opera Theatre as the Marquise in Daughter of the Regiment and will return to The Florentine Opera to
perform Third Lady in the Magic Flute and Baltimore Concert Opera for Mrs. Lovett in Sweeney Todd.

Ms. Bank’s recent performances include Mary in Die Fliegende Holländer and Marcellina in Le nozze di Figaro with
Florentine Opera Company, the Old Lady in Candide and Mrs. Peachum in Kurt Weill’s The Threepenny Opera
with Amarillo Opera, and Golde in Fiddler on the Roof with Ash Lawn Opera. Ms. Bank has performed Azucena in
Verdi’s Il Trovatore with Opera in the Heights in Houston and recently returned to the company to sing The Witch
in Hänsel und Gretel to rave reviews.

The Houston Chronicle praised her “lusty singing” and Susan Boyd, a
Houstonia Magazine blogger, praised her performance saying “Perhaps most memorable was Jenni Bank, the hunchbacked villain Knusperhexe who flew in on a broom in the third act and made this opera her own. She might have been baked into gingerbread cookies, but her voice is what I’m still marveling over. With a complex mezzo-soprano timbre, flush with color but technically exact, it was a surprise that Bank could also cackle and crackle her evil spells “Hocus pocus!”

Additionally, Ms. Bank has been featured on public television and public radio as an up-and-coming artist and has sung a recital in her birth country of South Africa. Ms. Bank recently returned to her
hometown of Binghamton, New York to sing the role of Mrs. Lovett in Sondheim’s Sweeney Todd. Ms. Bank is a
winner of the prestigious Sullivan Foundation Award and receives a continuing career grant from the foundation.
She has been recognized by numerous vocal organizations and competitions, including the finals of the Fritz and
Lavinia Jensen Competition, first place in The Harold Haugh vocal competition, second place in the Shreveport
Opera Singer of the Year Competition, a semi-finalist in the Competizione dell’Opera in Germany, and was semifinalist in the Metropolitan Opera National Council auditions.