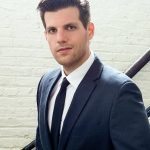 Hailed by Opera News as  “the very picture of youthful optimism and potential,” John Kaneklides is quickly establishing himself as a celebrated tenor of his time. After being named a finalist in the Nico Castel International Master Singer Competition in 2011, Kaneklides was personally championed by the prolific diction coach and opera translator – a mentorship that propelled his career in opera, art song, and oratorio.

Next season Kaneklides will be creating the role of Narcisio in the world premier of Harold Blumenfeld’s Borgia Infami with Winter Opera Saint Louis. He will also be making his role debut as Ralph Rackstraw in H.M.S. Pinafore with the Young Victorian Theatre Company. On the concert stage he can be heard as the tenor soloist in Orff’s Carmina Burana with the Florida Orchestra, under the baton of Michael Francis.

The 2016-2017 season brought Kaneklides rave reviews for his role debut in the title role of Les contes d’Hoffmann. The Tampa Bay Times said he “makes for a mesmerizing lead as the poet Hoffmann, equipped with matinee idol looks and a electric sound that continues to surprise.” Kaneklides also starred as Villiers, The Duke of Buckingham in the highly anticipated New York premier of Carlisle Floyd’s most recent opera, The Prince of Players, with the Little Opera Theatre of New York and reprised the role of Rodolfo in La Bohème with the Arts Festival Boca. Additionally, Kaneklides was a featured soloist in several concerts across the USA, including the Eve Queler and Friends concert series with the Opera Orchestra of New York and in North Carolina with Opera Experience Southeast.

Past seasons have brought Kaneklides notable acclaim for his portrayals of Alfredo in La traviata, Nemorino in L’elisire d’amore, Edgardo in Lucia di Lammermoor, Rodolfo in La bohème, Jeník in The Bartered Bride, Fenton in The Merry Wives of Windsor, Cassio in Otello, Pong in Turandot, Rinuccio in Gianni Schicchi, Laurie in Little Women, and Micah in an off-Broadway production of Carlisle Floyd’s Slow Dusk.

Kaneklides is also making a name for himself in classic musical theatre roles such as Henrik in A Little Night Music and Tony in West Side Story. Additionally, Broadway World noted his portrayal of Lt. Joseph Cable with St. Petersburg Opera as, “chillingly real,” “simply brilliant,” and “whenever he sings his voice makes the audience melt.”  The Tampa Bay Times raved that, “his stage presence and haunting tenor delivery are a cornerstone for this production.”

Kaneklides has sung around the United States with some of the nation’s most recognized programs. As a young artist, he has spent summers singing for Bel canto at Caramoor in Katonah, New York and Opera North in Lebanon, New Hampshire. Other professional engagements have taken him to St. Petersburg Opera in Florida, Opera Carolina in North Carolina, and Carnegie Hall’s Weill Hall in New York City.

Having made his radio debut in 2012 in The North Carolina Baroque Orchestra’s recording of Handel’s Messiah as the tenor soloist, Kaneklides is an avid oratorio singer. He has performed as the tenor soloist in works such as Mendelssohn’s Elijah, Dubois’ The Seven Last Words of Christ, and Stainer’s The Crucifixion.

Kaneklides is a proud native of North Carolina and currently resides in New York City. He holds undergraduate and graduate degrees in Vocal Performance from Winthrop University, as well as a bachelors in finance. Kaneklides is a student of Bill Schuman.