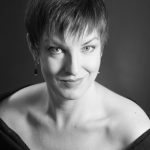 Rebekkah Hilgraves was born in Washington, D.C. and now makes her home in the Western Highlands of North Carolina. She began training seriously for a vocal career in her teens. Studies in Voice Performance at Northern Illinois University included art song and opera, early music performance practice, vocal pedagogy and stagecraft.

Her singing instructors have included Myron Myers in Chicago; Genia Las in Buffalo, New York; Edward Sayegh, a San Francisco-based instructor; Gerald Martin-Moore, Thomas Wolf, and Neal Goren in New York City.  Rebekkah has performed in numerous operas, solo recitals and as a guest concert artist in venues throughout the United States. She gave the premiere performance of a new work, Rachel Rising (text by Rebekkah, and music by Rob Deemer) in October 2008 in Tennessee, and performed it again in October 2013 at Northern Illinois University as the culmination of a week-long teaching residency.

In and around New York City, she performed the roles of “Violetta” in Verdi’s La Traviata (Little Opera Company of New Jersey, 2006), “Rachel” in the world premiere of The Eglantine by Sam Belich (New York City, 2005), “Elisabetta” in Verdi’s Don Carlo (Opera Drammatica, 2004), “Gerhilde” in Wagner’s Die Walküre (The Valkyrie Project, 2005 and Opera Drammatica, 2004), the title role in Puccini’s Suor Angelica (Chelsea Opera, 2004 and American Singers Opera Project, 2003), and has performed the soprano solo in Haydn’s Lord Nelson Mass (Ars Musica Orchestra and Chorale, 2002). In 2003, she also received “Honorable Mention” by the Amici Vocal Competition in Connecticut.

Hillgraves has been named “Best Actress in a Musical” by the San Francisco Bay Area Theatre Critics’ Circle for the leading role in an original work with the Lamplighters, itself an award-winning light opera company in San Francisco. Ms. Hilgraves has starred in operas and light operas, including in L’Étoile by Chabrier (Princess Laoula) with Pocket Opera (San Francisco); the title role in Princess Ida by Gilbert and Sullivan (Lamplighters); the Second Prioress (Madame Lidoine) in Poulenc’s Dialogues of the Carmelites; “Helen” in Three Sisters Who Are Not Sisters by Ned Rorem.

Although she still occasionally presents solo recitals, she is largely retired from classical singing.